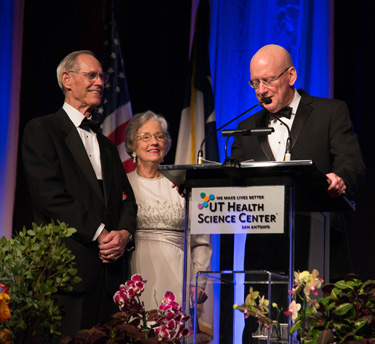 William L. Henrich, M.D., MACP, president of the Health Science Center, on Sept. 26 announced the establishment of South Texas’ first Institute for Alzheimer and Neurodegenerative Disease, supported by $35 million in funds raised primarily from the community.

This institute is designed to be a comprehensive care center, Dr. Henrich said during the 2015 President’s Gala held at the Grand Hyatt San Antonio. The institute will feature expert diagnostics; physician specialists in Alzheimer’s, related dementias, Parkinson’s and other diseases; support programs for caregivers; and access to clinical trials of new therapies.

“As one of America’s leading academic health centers, we must serve our community’s health-related needs,” Dr. Henrich said. “The time is now to focus on new discoveries, treatments and auxiliary services to help those suffering from the ravages of Alzheimer’s disease and related disorders such as dementia and Parkinson’s disease.”

“We will build a top-flight institute consisting of faculty and staff who are experts in neurodegenerative diseases,” said Francisco González-Scarano, M.D., dean of the School of Medicine, vice president for medical affairs and a neurologist at the Health Science Center. “This faculty will include the experts we have now and others we will recruit, including an internationally respected institute director.”

San Antonio, which attracts a large number of retirees, especially from the military, has the potential to be even harder hit. In addition, Hispanics, who constitute a majority of the city’s population, are about 1.5 times more likely to have Alzheimer’s disease and other dementias than non-Hispanic whites.

Bartell and Mollie Zachry
In accepting the role as gala honorees, Bartell and Mollie Zachry wanted the gala to benefit a cause that reflects their commitment to serving the community. Alzheimer’s disease touches everyone, and has touched the Zachrys through friends and family who have coped with the disease. One of those friends was Glenn Biggs, who was diagnosed with Alzheimer’s. He and his wife, Ann, walked that path until his death in May 2015. Ann Biggs was Honorary Gala Chair, and Glenn Biggs served with her, in memoriam. “Glenn Biggs was the inspiration for our vision to establish the Institute for Alzheimer and Neurodegenerative Disease, and we are committed to the promise we made to him and so many other families to see this vision achieved,” Dr. Henrich said.

Need for an Alzheimer’s institute
Alzheimer’s exacts a terrible toll on patients and their families. “It is a disease for which there is currently no means to prevent or cure its progression,” Dr. Henrich said. “It is a condition that not only devastates the patient, but also his or her family and friends, as they helplessly witness the inevitable decline.”

The stress of providing caregiver services diminishes the health and well-being of caregivers, resulting in $679 million in higher annual health care costs for caregivers vs. non-caregivers in Texas in 2013.

The Institute for Alzheimer and Neurodegenerative Disease will open in 2016, Dr. Henrich said. Located at the Medical Arts & Research Center of UT Medicine San Antonio, clinical practice of the School of Medicine, the institute will offer hope to patients and families by providing comprehensive clinical care and leading medical research to advance new therapies, including access to national and international clinical trials. 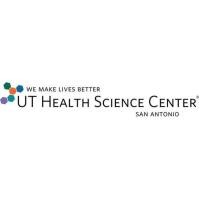