Padgett Stratemann & Co. is proud to announce the firm has been ranked number 99 on INSIDE Public Accounting’s Top 100 Firm rankings list for 2015 and the 10th largest firm in the Great Plains Region. The firm moved up seven spots from its 106 ranking in 2014. The rankings were announced in IPA's 25th annual report of the nation's largest accounting firms.

"We are honored to be recognized as one of the Top Firms by INSIDE Public Accounting," said John Wright, managing partner of PS&Co. "The firm continues to grow each year and this recognition reflects the loyalty and commitment of every single team member, along with the continued growth and success of our clients."

In addition, PS&Co. is recognized by IPA as one of the Best of the Best for 2015, an honor presented to only 50 CPA firms in the nation each year. Since 1994, IPA has named the top 50 Best of the Best Firms in the U.S. Selected and ranked exclusively on performance in specific areas of management, these 50 firms are the most successful in the profession.

“Best of the Best firms aren’t just successful in a financial sense – they’re firing on all cylinders,” says Michael Platt, principal of the Platt Group and publisher of INSIDE Public Accounting. “We look at the whole firm: How do they treat their employees? Are they offering specialized services to their clients? Are they planning now for a new leadership team in the future?”

Annually, more than 500 accounting firms across North America complete the in-depth financial and operations survey. All of the data is compiled into an annual ranking of the nation’s largest accounting firms and released each August. The IPA 100, as ranked by net revenue, consists of the Big 4 accounting firms (which collectively represent $43.4 billion this year) and 96 national, regional, and local powerhouses representing $15.4 billion. Thirty-five accounting firms report revenues of more than $100 million. The 100th largest firm in the country this year is at $32.4 million. 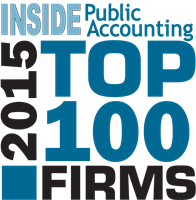