Brown, 41, already was part of the 124-year-old school's history, having served as TMI chaplain from 2004 to 2007. "I think what drew me (back) to TMI is that we're kindred spirits," Brown said. "The leadership, the academics, the competitive athletics and the spirituality, all together, that's who I am, and that's what TMI is."

Until earlier this year, he was rector of St. Alban's Episcopal Church and School in Harlingen. During his leadership, the church experienced a 38-percent increase in Sunday attendance, and the school's enrollment rose by nearly 20 percent.

Appointed by the bishop of the Episcopal Diocese of West Texas -- of which TMI is the flagship school and only high school -- he returned to TMI in February 2017, working alongside former headmaster John W. Cooper, Ph.D., until the latter's retirement at the end of May.

Brown is the school's 31st headmaster and the first clergy member to head TMI since 1989.  "I think this chapter in the life of TMI is the perfect timing for a clergy headmaster to prayerfully lead the community," said Brown, who earned his master of divinity degree in 2002 from the University of the South (Sewanee). "It's a great school, and yet the best days are still ahead."

The new headmaster lives on campus with his wife Kimberly, a physician’s assistant, and their sons Parker, 13, and Christopher, 11, who both will attend TMI this coming year. 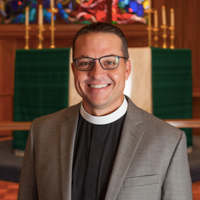