Texas elected officials and the Texas Transportation Commission have taken a major step in an ongoing effort aimed at improving traffic flow on some of the state's most congested urban highways.

The Commission today approved directing $1.3 billion to 14 projects in the state's top metro areas including Houston, Dallas, Fort Worth, Austin and San Antonio.

“The Transportation Advocates of Texas welcome the Texas Transportation Commission’s action focused on delivering projects at an accelerated pace that addresses gridlock in some of the state’s most congested areas," said Dennis Kearns, TAoT Chairman.

"Our thanks to Commissioner Bruce Bugg who leads the statewide effort directed primarily at the metro areas. The effort is the initial phase of a new statewide plan to address congestion made possible by recent legislative action ending diversions and identifying new sources of revenue for the agency. We applaud the leadership of Governor Abbott, Lt. Governor Patrick and Speaker Straus as well as State Senate and House members who made the effort possible. TAoT will continue its advocacy for a long term, robust and sustainable funding source for TxDOT with legislative leaders and members and continue to closely work with TXDOT Executive Director James Bass to focus TAoT efforts where they can best assist the agency,” Kearns said.

Vic Boyer, TAoT vice chair for legislative relations, offered particular thanks to members of the Legislature who have been creative in identifying new transportation funding sources which Texas voters have overwhelmingly approved in the past two years through Proposition 1 and Proposition 7.

The $1.3 billion represents approximately two years of funding in the State Highway Fund that was previously appropriated for non-construction spending. The Legislature in 2015 ended this diversion, making about $700 million a year available for TxDOT projects.

The Transportation Advocates of Texas is a statewide coalition that brings together cities, counties, established community and regional organizations and business interests to support additional funding to help meet the challenging transportation demands facing Texas. 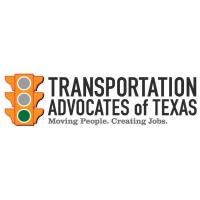